Did you know that Trisha Yearwood has a cookbook out? I did. And I know this because I’ve been seeing a lot of bloggers talking about it. But you know what? I really wasn’t excited about it. As a matter of fact, I don’t even know if I can honestly say I read a single post all the way through.

Why? I don’t know. Its not that I don’t like Trisha Yearwood. I do. She has a wonderful voice and she is a great musical talent. I just never thought of her as a cook, apparently, because I have been dismissing her new book without cause. And you know what? That’s not like me. I am a very open minded person, and I am always trying new things, so I don’t know what my problem was.

That is, until my friend Kim posted Trisha’s apple dumplings. Oh MAN, did they look good. I admit, I skulked around the internet until I found the recipe. (Hey, don’t look at me in that tone of face, when you buy a car, you give it a test drive first, right?)

It really doesn’t get much easier than this. And inexpensive, too. I mean, a can of biscuits, two apples and some staples like butter and cinnamon. I whipped these bad boys up Sunday morning and took them with me to the weekly family breakfast at the motherinlaw’s house. You could say they went over well. You know, considering that the average person at the table had 2-3 dumplings and I swear someone almost licked the pan clean. These were TASTY. Health food, this is not, but really, if you think about it, there are a lot of breakfast foods that are worse for you.

Trisha has achieved a new level of respect in my book, and I just might have to put her book on my list. I’ll definitely be making these again. 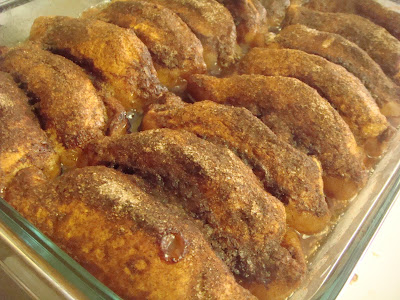 Apple Dumplings
2 Granny Smith apples
1 cup water
1 cup sugar *divided
1/2 cup (1 stick) butter
1/4 tsp. vanilla extract
8 canned biscuits (buttermilk)
4 tsp. ground cinnamon
Preheat oven to 375 degrees.
Peel, core and slice apples vertically into 8 slices each. Cover with water to keep them from getting brown.
In a medium saucepan, mix the water, 3/4 cup sugar, butter and vanilla over heat and bring mixture to a boil.
Separate each biscuit into 2 layers. Wrap a biscuit layer around a slice of apple, stretching it to slightly overlap and seal the bottom. (I used my mini Silpin to roll them out since stretching them wasn't working too well for me.)
Place the wrapped slices sealed side down in a 9 X 13 baking pan. Pour the hot sugar mixture over the apple slices.
Mix the remaining 1/4 cup sugar with cinnamon and sprinkle over the tops of the wrapped apples.
Bake for 35 minutes or until golden brown. Serves 8
Posted by Ty'sMommy at 6:58 AM

I'm always nonplussed when I see singers or other celebrities jump on the cooking bandwagon. I think for a great many of them they just do it because they can and not because they have talent. I'm glad to know that there is actually a gem in the mix. The apple dumplings look and sound amazing!

Thanks for the shout out! I'm glad to hear that everyone enjoyed the dumplings.

Ty'sMommy
I love bacon. I'm completely enamored with it. And now I'm here to prove it. How about you? How much do YOU love bacon?

I'm on the Foodie Blogroll!