A Taste for Adventure....and Nostalgia

Ok, I messed up.
I have recently joined a wonderful blogging group called Cook the Books, that feeds not only my enthusiasm for cooking and food, but my love of literature.
Unfortunately, I was convinced that I had until February to put my post up. I've had it written for weeks, but my pictures didn't turn out very well and I was waiting to re-make the recipe to post it to my blog. Apparently, I waited too long. The roundup went out yesterday, minus my submission. So, since I didn't get a chance to make another batch, you're going to get the pictures of the first attempt. One thing you must know is that the hubs and I were having a verbal pissing match while the bread was in the oven, so it got a bit overdone; and then again after it came out, so it cooled off too much and looks rather drab. However, it did taste phenomenal. So, here we go.
Reading Anik See's 'A Taste for Adventure' left me longing to travel again. In my youth, I was always determined that I would lead a life filled with travel to exotic places and faraway lands, and I started off on a journey that would shape the rest of my existence.

I didn't get very far.

Or, at least, I didn't get far very often. In the summer between my sophomore and junior years in high school, I was lucky enough to have the opportunity to travel to Spain on an exchange program. Full of the natural exuberance that is so often indigenous to the teenage humanoid species, I packed up and flew off to Spain. And landed in an entirely foreign world. I was an 'A' student in Spanish, I had prepared myself (as much as a sixteen year old midwestern catholic school girl can) for my life's first experience overseas, and felt nothing but confidence in my ability to not only mingle with the inhabitants of this new country, but to fit in just like I'd lived there my whole life. My foreign language skills were impeccable, of course.

Too bad I didn't know much about geography, or eastern european history, or the fact that Spanish isn't the only language spoken in Spain. Or, more specifically, Catalonia.

See's chapter on Russian Georgia sparked more than a memory for me, it rekindled the long forgotten flame of love and adoration I hold for the Catalan people. See describes the Georgians as 'proud' and hints at their 'victorious' nature; their many years of oppression and survival. I was immediately hurtled back in time, and reincarnated as a moderately motion sick teenager, exhausted from an overnight flight and eight hours on a bus (worthy of a nearly medievil description) in the hot Spanish countryside. I was greeted by an extremely enthusiastic couple and their young son, (minus the daughter of my own age that I was expecting to meet and bond with), speaking a language that caused my brow to furrow, my heart to pound in my chest, and prompted more than one tearful collect call back home to mom and dad.

You see, the Catalan people don't speak Spanish. That's not to say that they CAN'T speak Spanish.....they just DON'T. The Catalan suffered through persecution and regimes that forbade the teaching of their language, not to mention even SPEAKING it. They were strong, they were victorious; as even though they are not an autonomous country, they still maintain themselves as an autonomous PEOPLE.

Living in Catalonia is the period that I recognize as the beginning of my love affair with food. It was where I discovered that not all pizza comes from Little Caesar's, that seafood is a pleasure and not just a menu item at Long John Silver's, and that cooking from scratch most definitely does not equate with something that comes from a box.

During my stay, I ate a lot of "street food", went to a number of festivals, and discovered what the life of the average person in Catalonia is like. Food is fresh, quick, and (BONUS!) they drink wine with every meal. Yes, I know that is typical in most countries I don't live in, but it is also where I learned to drink socially and responsibly, without throwing myself into drunken debauchery in college, like most of my friends.

So, in honor of the proud people of Georgia and Catalonia, and my love for street food, I decided to make Khachapuri from the Georgian chapter, as it reignited my romance with Catalonia, and reminds me so much of something you might get from a street vendor there. A simple, yet luscious bread, that even I, in this little podunk American town, can find the ingredients for.

Thank you, Anik, for reminding me of my youth, my love of foreign cultures, and my passion for food. I hope you enjoy my submission for Cook the Books!
Khachapuri
(from A Taste for Adventure, page 89)
2 1/4 cups flour
1/2 teaspoon salt
3/4 cup butter, chilled and cut into small pieces
2 eggs
1/2 cup plain yogurt
1/2 pound havarti cheese, grated
1/2 pound feta cheese, crumbled
2 TBSP fresh mint, cilantro or parsley (I used cilantro)
1 egg, beaten with 1 TBSP water

Heat the oven to 350 degrees. Combine the flour, salt, and butter in a large bowl and rub the mixture between your hands until crumbly (this is also easily done in a food processor or mixer - I used a pastry cutter). Add one egg and the yogurt and mix until a ball is formed. Roll out the dough into a rectangle of 1/4 inch thickness.
Mix together the second egg, cheeses, and herbs and spread out over half the dough. Fold the dough over the cheese mixture to cover it and seal the edges by crimping them with a fork or your fingers. Beat the remaining egg and water together and brush the dough with it. 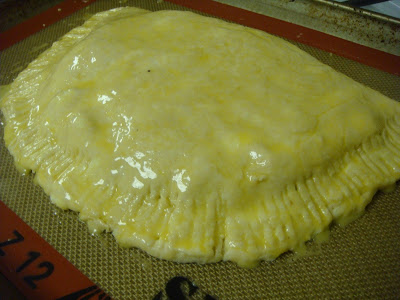 Bake on a greased baking sheet for about an hour, until the dough is golden brown. 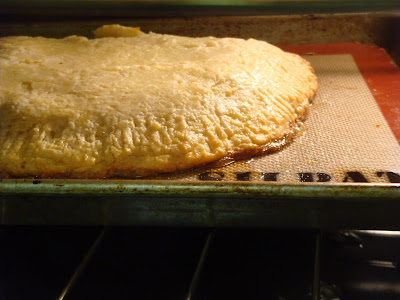 (yes, this is a shameless shot of the interior of my new oven)
Let the bread cool slightly. Cut into wedges or squares and serve while still warm. 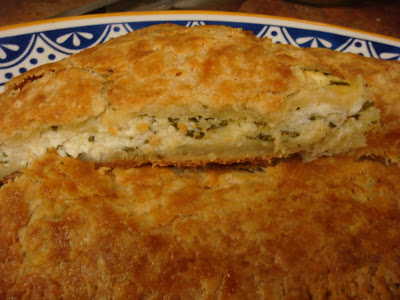 Yum! I think your loaf looks wonderful! I also missed the round up because I labored so long over what to make, the date was past. Then, I found a great recipe for Singapore noodles. Oh, well, next time. Loved your story.

I'd be happy to add you to the roundup, even now, so just let me know.

What a great experience you had in Catalonia! Good for you. I dream of traveling the world and hopefully there will be time for that later on. That bread looks terrific. Great choice.

The bread does look yummy and you made me nostalgic for my high school overseas travel. I was lucky enough to be chosen for an exchange program with the YMCA and we went to South America. Unfortunately for me, I chose to learn French in school ( and not very well) so I was a bit handicapped. In Equador, my host family was thrilled to learn that I spoke French as their daughter spoke french. She starting speaking the most beautiful words and I just stared at her with a stupid look on my face. Apparently the only french that stuck in my brain was "library" and a phrase my dear friend plumbelieve asked the little nun who taught our class from a popular song (and something nice catholic school girls shouldn't talk about in public). Needless to say, I survived the trip and will always remember my few weeks abroad in a strange land! Thanks for posting about your adventures - it brought back great memories!

I just love reading your posts, and I totally wish that I could experience Catalonia. Someday...

The daughter of a friend of mine recently went to Spain and had a similar experience with the language, and not being prepared. That bread looks great, now I want to try it.

Ty'sMommy
I love bacon. I'm completely enamored with it. And now I'm here to prove it. How about you? How much do YOU love bacon?

I'm on the Foodie Blogroll!